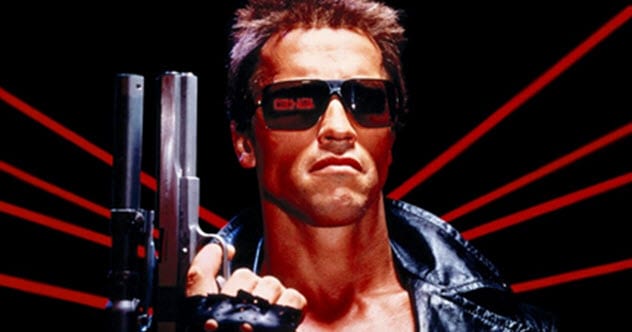 Discover how contemporary film—and the action genre in particular—evolved from behind-the-scenes antics and production quirks in classic action movies. Heck, an entire college course could be taught on Arnold Schwarzenegger alone. But we’ll focus on a variety of performances and stories in certain action films from the late 1970s to the 1990s.

If you’re a film nerd, we think you’ll love these 10 background stories. If you haven’t seen these masterpieces yet, what are you waiting for?

Spoiler Alert: Obviously, we’ll reveal information about the movies on this list. If you haven’t seen a particular film and don’t want to know what happens, then skip that entry and go to the next one. You’ve been warned.

Top 10 Action Movies To Laugh Out Loud To

Mad Max was way ahead of its time and so audacious that the film was banned in its native Australia upon release. Before delving into the fascinating history of the actual production, we need to talk about Mel Gibson. Although most actors can go from 1 to 10, Gibson has always had a knack for going to 1,000.

Born in Peekskill, New York, he moved with his family at a young age to Australia. At age 23, Gibson was a relatively unknown soap opera actor. Apparently, he got into a violent bar fight and his face was badly bruised.

Before his face healed, Gibson drove his friend Steve Bisley to a Mad Max audition. (Costar Bisley wound up playing Jim Goose in the movie.) Meanwhile, Gibson was quickly cast as a “freak” side character.

Time went by, and Gibson’s wounds healed. When production began, his buddy got booted to a supporting role and Gibson snagged the lead. Additionally, the director, George Miller, was an emergency room doctor who based the movie’s violent car crashes on what he had seen in real life.[1]

The nitty-gritty relatability of the original film’s dystopia is accidental. It feels so close in time—yet so far away—because Miller and his producing partner, Byron Kennedy, opted to set the plot in the future. A modern version would have needed many more extras, buildings, and permits. It was cheaper and easier to film in the Australian outback.

Although plenty of great car chases came from that film era (Bullitt, The French Connection), Mad Max is in a class of its own with its belligerent, human-driven madness that revs as loud as the drag-style stunt cars. For about 20 years, Mad Max was the most profitable film ever made (based on the ratio of its budget to box office receipts).

This movie is often mistakenly called Rambo. However, the technically correct title is First Blood. Based on a book by David Morrell, the film script made the rounds in Hollywood for a decade with names like Al Pacino, Clint Eastwood, Steve McQueen, and Robert De Niro almost signing on.

It took a $3.5 million paycheck and permission to do a rewrite for Sylvester Stallone, still riding high from the massive success of Rocky, to officially get on board. With stellar performances from Brian Dennehy, Richard Crenna, and a cantankerous Jack Starrett, the film dives much deeper than just explosions and violence.[2]

In fact, John Rambo doesn’t actually kill anyone in the first film. It was a new form of storytelling that touched upon what is now known as post-traumatic stress disorder (PTSD). It was called “shell shock” at the start of the 20th century.

First Blood wonderfully weaves together a story of power-abusing cops, the repercussions of coming home from an unpopular war, and the ravages of PTSD, anxiety, paranoia, and outright animalistic self-defense. All the sequels are enjoyable romps with lots of blood and guts, but the original has soul. The veteran just wanted to get some food, cops had to play their games, and the town of Hope, Washington, practically got wiped off the map.

Before he was Neo or John Wick, Keanu Reeves (the “nicest guy in the world”) started out in 1989 as the goofy Ted Logan from the classic Bill & Ted’s Excellent Adventure. Then director Kathryn Bigelow cast the young Reeves as the iconic Agent Utah in Point Break. That propelled his career toward the action star that he would eventually become.

Speed, directed by Jan de Bont, was based on a story written by Akira Kurosawa that became the film Runaway Train. As most studio-driven screenplays are constantly changing, the initial versions of Speed have quite an array of differences.

Although the script was originally written by Graham Yost, the dialogue was almost completely redone by a young and uncredited Joss Whedon. Jeff Daniels’s character, Harry, was intended to be the bad guy. But his performance was so endearing that the producers thought he would be unbelievable as a villain.[3]

During test screenings, audience members were so entranced by the nonstop action that they walked backward if they had to use the bathroom. They didn’t want to miss a moment.

Speed solidified Reeves’s status as an action star, while Sandra Bullock charmed the world in her role as Annie Porter. (She learned how to drive a bus before shooting.) And no one can forget the wily, hypnotizing performance by Dennis Hopper as mad bomber Howard Payne.

James Cameron’s first film (he has disowned his actual directorial debut, Piranha II: The Spawning) was inspired by a vivid nightmare he had. With a budget of only $6 million, The Terminator is an impressive film from a production point of view because it was technically an indie at the time.

According to Arnold Schwarzenegger, O.J. Simpson was supposed to be the Cyberdyne Systems T-800 Model 101. But Cameron, notoriously outspoken and occasionally crass, denied it by stating that he had sacked the idea before it even got to the table. Either way, they both acknowledge that O.J. was mentioned at some point.

The special effects are fascinating. The tanker truck explosions scene was composed of dozens of shots with a miniature model. In the opening sequence, the skulls that were crushed to dust were actually as small as marbles.[4]

When Nic Cage tells you to put the bunny back in the box, you do it. Directed by Simon West, this eccentric 1990s masterpiece has the most impressive cast of any film on this list. John Cusack’s and Steve Buscemi’s roles were explicitly written for them.

However, John Malkovich’s wonderfully psychotic Cyrus the Virus character was almost played by Gary Oldman. Cage also had some tough competition for his role. But doing most of his own stunts throughout the film solidified him as a blockbuster action star.

In the original script, the plane was supposed to hit the White House. However, the producers opted for Vegas for two reasons. First, it was more plausible geographically. Second, you could buy a “dead” casino and thrash it to pieces back then because the Las Vegas Strip was undergoing rapid reconstruction.[5]

As the first film in one of the finest action franchises, Die Hard is also the best Christmas movie ever made. To top off the accolades, this masterpiece came from a notable director of the 1980s and ’90s, John McTiernan (Predator, The Hunt for Red October).

Based on Roderick Thorp’s 1979 novel, Nothing Lasts Forever, Die Hard just keeps getting better with age. Bruce Willis kills it as John McClane. How can you not love his wisecracking, misanthropic detective character?

However, the true legend of Die Hard is none other than the late Alan Rickman’s villain, Hans Gruber. Rickman meticulously made the character his own, insisting on business attire for Gruber instead of the mercenary clothing worn by his goons. Rickman approached the role thinking that Gruber wasn’t really all that bad. Gruber knew what he wanted and focused on getting it.[6]

In the famous scene where Gruber falls from the top of Nakatomi Plaza (which was really 20th Century Fox’s corporate headquarters), the stunt coordinators purposely miscounted the drop per McTiernan’s instructions. That way, Rickman would be caught off guard by the fall. The classic expression on his face is genuine.

Then there are the glass scenes. Poor McClane’s bare feet are always cringeworthy, and they should be. Including all the destruction with explosions, gunfire, and painful footsteps, Die Hard’s producers shelled out around $130,000 just on glass.

The Rock, one of Sir Sean Connery’s favorite films, is everything an action movie should be. Another 1990s film that used practically every actor available in Hollywood, The Rock is bonkers blockbuster. Nic Cage ad-libs most of his dialogue. Ed Harris shouts his way through a great performance as Connery and Cage complement each other amazingly.

Connery even insisted that a cabin be built on Alcatraz Island during the shoot because he simply could not be bothered with the commute. Famed film scribe Aaron Sorkin was also involved, although he was uncredited. According to sources, Sorkin “wrote great dialogue.”[7] A fun fan theory suggests that Connery’s Mason character is really a geriatric James Bond.

Let’s start with some trivia. Roger Murtaugh (played perfectly by Danny Glover) never utters that line in the original Lethal Weapon, though he does say it in the sequels. In the first movie, Murtaugh sighs, “I’m too old for this sh—t.”[8]

Glover costars as the reluctant action hero while Mel Gibson gives a wild dog, tour-de-force performance that justifies all the sequels (even though none were up to par). Although it’s hard to imagine, Gibson’s role of Martin Riggs almost went to Jeff Goldblum or Patrick Swayze.

While shooting the scene where Riggs puts a pistol to his head and contemplates suicide, Gibson in all his glorious madness had a blank in the chamber to make the performance more intense. (Blanks are dangerous; that’s how Brandon Lee died in The Crow.) Meanwhile, Gary Busey channeled the soulless eyes of a shark to perfectly execute his performance as the mercenary Mr. Joshua.

Surprisingly, Leonard Nimoy was offered the director’s chair that wound up going to Richard Donner. Throughout the franchise, Donner made political references in the films to racism and apartheid, which caused him to receive many death threats.

On a lighter note, let’s not forget Gibson’s homage to The Three Stooges. It made his unhinged character somewhat grounded and lovable.

We didn’t want to genre-blend in this list, but The Matrix has to be mentioned. Action movies, and films in general, have never been the same since this masterpiece. The Wachowskis crafted arguably the greatest action movie of all time.

Starting production on a gamble, they wanted an $80 million budget but only got $10 million. Rolling the dice, they spent the entire $10 million on the opening sequence with Carrie-Anne Moss’s Trinity character obliterating several SWAT officers. It took six months of training and four days to shoot. The studio saw it, loved it, and greenlit the rest of the initial budget.[9]

The revolutionary “bullet-time” effect was created especially for the film and needed 120 cameras to complete. It also took 10 squib-ridden days to shoot the infamous “lobby scene.” And for anyone wondering, no, The Matrix wasn’t shot in the States but in Sydney, Australia.

Bruce Willis and Samuel L. Jackson make for an outstanding pair in the only sequel ever made by the legendary John McTiernan. Willis personally requested Jackson for the part. It’s pure brilliance. Shamefully, you almost forget Hans Gruber in favor of his equally sociopathic brother, Simon Gruber, perfectly played by Jeremy Irons after Sean Connery turned down the role.[10]

We love most that the New York City featured throughout the film is a remnant of a bygone era when Rudy Giuliani was still mayor there. During this wild shoot, the stunt team really blasted a sideways subway car traveling over 72 kilometers per hour (45 mph) at stunt extras.

Honestly, Die Hard With A Vengeance goes toe to toe with the original . . . just on steroids.